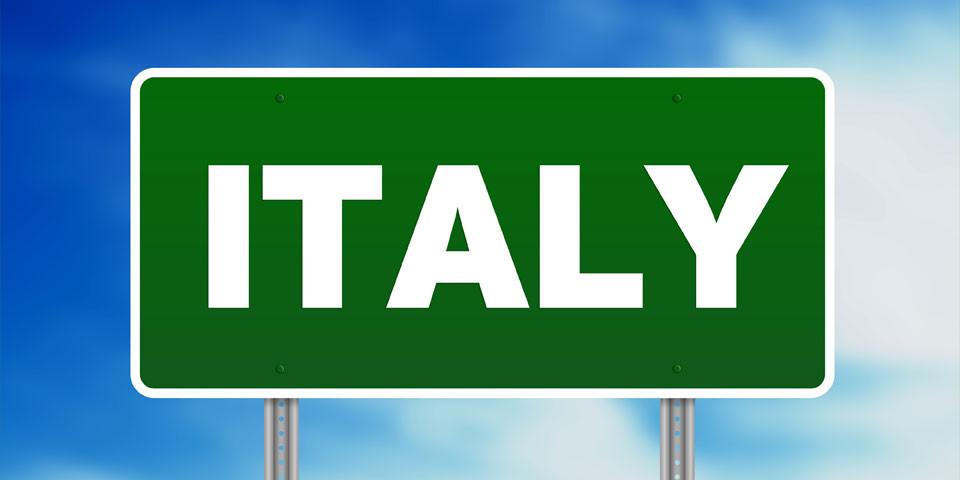 Italy (official name Italian Republic, “Repubblica Italiana”) is a Mediterranean peninsula, located in Southern Europe. It is peculiarly shaped like a boot kicking the island of Sicily. Sicily and Sardinia are the largest islands in the Mediterranean. Italy also includes the sovereign states of the Vatican City, in Rome, and San Marino, the world’s smallest country, on the north-eastern coast, while Campione d’Italia is an Italian enclave in Switzerland. Italy is mostly covered by mountains. The Dolomites, located in northeastern Italy, are part of the Alps, which extend across the northern border of Italy, from West to East. The Apennines stretch from North to South, dividing the east and west coasts. The Po Valley, the basin of the Po River, lies just south of the Alps; it is considered a fertile farmland.

In Italy, there are considerable climatic differences between North and South. The North, which is the region between the Alps and the Tuscan-Emilian Apennines, has a harsh climate: the winters are very cold, and the summers are very hot, with high humidity rates. The Centre, which is the region between Liguria and Rome’s area, has a mild climate, with small differences between summer and winter temperatures compared to the North: the cold period is shorter and not as intense, and the summers are longer, although the heat is not as suffocating as in northern cities, as the result of the impact of the sea on almost the entire area. In the South and on the islands, the winters are never too harsh, and the autumn and spring temperatures are close to the summer temperatures in other areas of Italy.

Italy was declared a democratic republic on June 2, 1946, when the monarchy was abolished following a popular referendum. The Constitution came into force on January 1, 1948. The executive power is jointly held by the Council of Ministers, which is led by the President of the Council of Ministers – in jargon referred to as “Premier” or “Primo Ministro” (Prime Minister).

Roman Catholicism is by far the main religion in Italy, although since 1984 it has no longer been the official state religion. Although most Italians are Roman Catholic, only about one third of them are active members. The number of practising Catholics in Italy has been decreasing over the past several years. Significant minorities include Protestants, Jews and Jehovah’s Witnesses, totalling approximately 400,000 members. Under the present Constitution, the Vatican City State is recognized by Italy as an independent, sovereign entity. The Catholic Church has a major influence on Italian politics, culture and social development, and enjoys some privileges as the result of its sovereign status and historical political authority, which is not shared by other faiths.

Religion classes are held in all public schools, although they are optional, and pupils are free to choose other subjects. Immigration – both legal and illegal – keeps adding large groups of non-Christian residents (estimated at one million), mainly Muslims, from North Africa, South Asia, Albania, and the Middle East. Buddhists number some 40,000 of European origin and 20,000 of Asian origin respectively; scientologists claim approximately 100,000 members; in addition, there are an estimated 30,000 Waldensians (concentrated mainly in the north-west of Italy) and approximately 20,000 members of the Church of Jesus Christ of Latter-day Saints (Mormons).

The Jewish community, which currently numbers about 30,000, is spread across 21 cities. According to recent polls, approximately 14% of the population consider themselves either atheists or agnostics.

The Italian estimated resident population exceeds 61 million, 5 million are immigrants. Italy currently has the fourth-largest population and the fifth highest population density in the European Union. The highest density (one-third) is in northern Italy. Immigration in Italy began relatively late, initially resulting in migratory flows partly “diverted” towards southern Europe, with Italy long functioning as a transit country for other destinations.

Euro (currency sign: €; currency code: EUR) is the official currency. The euro was introduced to world financial markets as an accounting currency on 1 January 1999. Coins and banknotes have replaced the “Lira” since January 2002.

For Example: to call the mobile phone number 334 1234567, dial 334 1234567. Please note that Italian mobile phone numbers don’t have the ZERO in front of the number, either for calling from abroad or Italy. In Italy, mobile/cell phones work on the GSM European standard, which is usually compatible with most international phones. If you are going to be in the country for some time, it might be worth getting an Italian SIM card. Phone tariffs are among the most expensive in Europe, especially if you’re calling long-distance or internationally.

Over the last years theft and violence have been on the increase in Italy as a result of migratory flow and financial crisis. Like the rest of Europe, major cities have unsafe areas that are best avoided, especially at night. In larger cities, especially on public transportation or in those areas attracting many tourists, pick pocketing or other petty crime may unfortunately happen.

When using bus, tram and metro, pay close attention to your personal belongings. Street children may stand outside railways stations, acting on their own or in pairs to distract their victims and rob them. However, if you follow simple common-sense rules you will have no problems. Here are a few tips:

In case of theft or loss, always report the incident at the police station within 24 hours and ask for a police statement (denuncia).

Italians consider everything that differs from their own culture a source of interest! Italy has many advantages as an expat destination: timeless art and culture, spectacular and varied natural beauty, irresistible design and fashion, incomparable wining and dining and a truly vibrant lifestyle. But what keeps people coming back and back perhaps, are the Italians themselves, and their ability to enthuse and inspire others. Integrating with Italian colleagues will indeed present a rewarding and stimulating challenge. Some customs are peculiar to Italy, and may differ from those in your home country.

When being introduced at business or social meetings, shake hands with everyone present – men, women and children -, and shake hands again when leaving. Friends often greet each other with a kiss on both cheeks.

Italy became a unified state only in 1861, which still often makes the Italians feel a stronger sense of belonging to their region rather than to their country as a whole.
Therefore, dialects, traditions, cuisine, and, above all, mentality temperament and lifestyles may significantly differ from region to region, as well as from north to south.

Since the restaurant staff’s wages can be low, tipping (10-15%) is always appreciated. Yet leaving small tips in bars and cafes is more customary in Rome and Southern Italy than in the North. The bill may include a sitting or cover charge called “coperto”, which ranges from 1 to 3 euros per person or even more, depending on the restaurant. It is automatically added to the bill and it must be visible on the menu. This is the charge for the tablecloth, silverware, etc. Lazio region, where Rome is located, has banned it (though it still routinely appears on menus) while it may be added in other regions. Like the coperto, the “servizio” charge (listed as a percentage of the total bill) is something you have to check.

The service charge must be listed on the menu, and is generally in tiny print above or below the coperto charge. Tipping is not mandatory but always appreciated. Italians generally do not tip as a percentage and may more easily round up the bill. There are a number of reasons for this cultural difference, primarily the fact that servers are paid a decent wage and do not live off tips. Secondly because “coperto” and “servizio” maybe charged already. Last but not least, many smaller trattorias in Italy are run by family. Leaving small tips in bars and cafes is more customary in Rome and Southern Italy. Remember to take your receipt with you, even if you are going to pay cash. It is the law and it is linked to owner’s tax purposes. You must be able to prove that you paid. Should a plain-clothes police officer stop you after you leave, you may have to pay a fine if you cannot show your receipt.

Only use regulated taxis! Avoid unauthorized taxi drivers, who are used to wait at central railway stations or airports. Taxis are expensive and not always the quickest means of transport. Hailing a taxi at the roadside is not easy, but there are plenty of taxi ranks in major cities. Although tipping taxi drivers is not compulsory, counters’ “round-ups” are appreciated.

Pets are allowed in restaurants, bars, shops, malls, unless a sign is displayed outside, and on public transports with different rules and conditions to be checked with the local service provider. Pets are not allowed in supermarkets, theatres and cinemas.

Fashion is taken very seriously in Italy as you will notice when walking around major cities. Business dress code is formal and colors are sober, especially at meetings.

It is prohibited in all indoor public places. Smoking is not allowed in offices, hotels, buses, railway and metro stations, discotheques, cinemas, shopping malls, bars, restaurants and airports, unless there are dedicated smoking areas.

Gay couples are not formally recognized by the State either, and are not allowed to get ‘married’. From a social perspective, homosexuality is accepted and tolerated, although public demonstrations of affection are best avoided, especially in small communities and in the South of Italy.

This is a deeply-rooted Italian custom! You would be surprised by the numerous versions of the classic ‘CAFFE’ ESPRESSO’ that people choose to drink in bars and cafes, and these will also vary from region to region – let us give you a few examples:

Following is the list of the Italian National Holidays:

Additionally, each city has its dedicated Saint Day, where a Patron Saint “Santo Patrono” is celebrated. Here are a few: